Image credit: source
AV-TEST has recently conducted a detailed analysis of antivirus software available for the Android, coming to the conclusion that Google Play Protect might serve as the worst of the lot. This, compounded upon by other malware breaches across Google products, might spell issues for the company.

AV-TEST, an independent antivirus evaluation agency, has made its living out of researching the effectivity certain products have against malware. Based in Magdeburg, Germany, the organisation particularly deals with software catering to Windows and Android. Software that meets a certain standard established by AV-TEST is also granted certification by them, which carries a significant amount of weight.

Their most recent list, amassing data from November, graded software on the basis of 3 categories: protection, performance, and usability. These 3 give a comprehensive report as to the level of security your device is offered, how smooth the antivirus runs, and how accessible it is to the general public. Each category was further scored out of 6. Google Play Protect, while given a supring zero in usability and a 6 in performance, was, sadly, granted zero in protection. Which might raise an eyebrow or two, especially considering past events with Google products. It also shows, relying solely on Google’s protection systems can be a risky decision for security-savvy Android users.

Avast reported, rather recently, that over 3 million users across Google Chrome and Microsoft Edge may have been exposed to malware via add-ons, extensions, and plugins that the browsers were unable to filter through. While this itself is no reason to hold Google accountable as even Avast antivirus itself was unable to nail down the threat in time, the Play Store tells a different story.

Malware often makes it onto the Store, particularly marketed towards demographics that would typically not know any better than to download it. Kaspersky Labs, an cybersecurity firm, recently highlighted 20 different malware containing apps disguised as Minecraft mods targeted towards young children unaware of the dangers such sources pose. Recently, a fake Cyberpunk 2077 mobile app was also spotted, which would hold user data at random in exchange for bitcoin transactions. While the latter was rooted out rather quickly, with solutions provided to unsuspecting victims, a trend seems to be emerging.

While the Google Play store still remains the best source of finding app on the Android, especially compared to uncredited APK files farmed online, it very much is susceptible to breaches of a more sinister sort. For now, especially considering the sensitivity of information that consumers now freely store on mobile devices, it seems only prudent that another antivirus be installed to work in conjunction with Play Protect. Google Play may not be the worst option available on the Android, but the company has a long way to go before declaring itself a safe haven.

On the other side, AV-TEST’s data shows, out of 17 tested tools, AhnLab V3 Mobile Security, Avast, AVG, Avira, bitDefender, G Data, Kaspersky, McAfee, Norton LifeLock, and Trends Micro, are the best Android security software. As in the analysis these tools achieved maximum score when it comes to protection, usability and performance. Take a look at these charts for more insights. 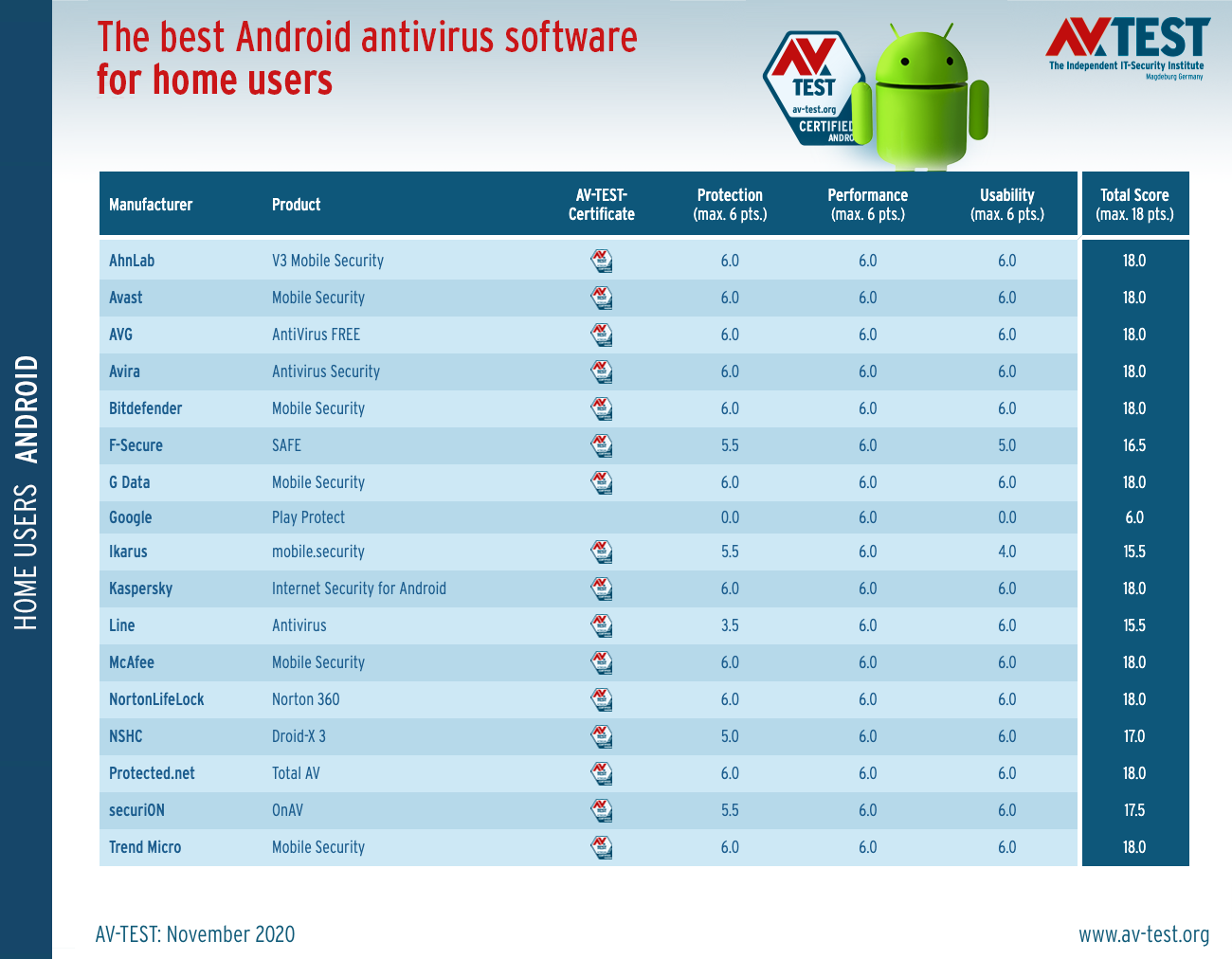